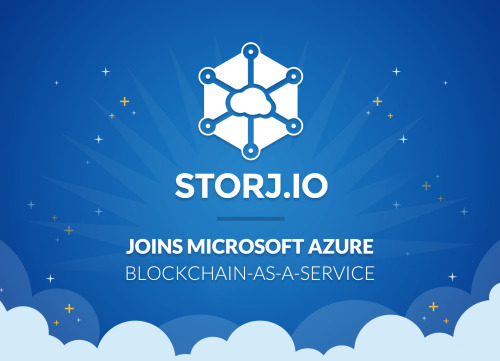 Storj Labs, the distributed object storage company, is joining the Microsoft Azure Blockchain-as-a-Service (BaaS) ecosystem to bring its service to an enterprise audience.

Storj Labs enables software developers to push and pull data for their applications in a lightning fast and decentralized way. The data is stored among a community of “farmers”, who share their unused disk space with the network in exchange for compensation in cryptocurrency (SJCX). The company was born out of the open-source Storj project, in which a large community of developers joined forces to build the most efficient, decentralized cloud using the blockchain protocol and the principles of the sharing economy.

Storj is joining the Azure Blockchain-as-a-Service (BaaS) ecosystem to make its service more easily accessible to enterprises. Using a 1-click deployment process, Azure users can now spin up a server pre-configured with Storj libraries to instantly access the Storj platform.

According to Ethereum founder, Vitalik Buterin, an important shift is underway in the industry: "Distributed file storage systems like Storj have the potential to eliminate high markup costs and market inefficiencies and provide a much higher level of privacy, reliability and quality of service than we see today."

Enterprises are also beginning to notice the potential of distributed object storage. Companies like Coca-Cola, Cox Enterprises, InterContinental Hotels Group, The Weather Channel and Capgemini are now exploring the commercialization of Storj within their own organizations.

To learn more about Storj and get early access to the platform, please visit https://storj.io.

What You Need to Know About Data Privacy Regulations

A Zero Trust, Decentralized Architecture is the Future of Security—an IDC Analyst Brief